Report of Glyphosate in Wine Not Transparent or Plausible

This photo of a man in hazmat spraying a vineyard has occasionally been used in articles about glyphosate. The chemical in the photo is NOT glyphosate. Read on to find out why.

On March 24th, Moms Across America posted study results commissioned by an unidentified fan, claiming that 10 California wines all tested positive for glyphosate, including organic wines. Aside from being implausible from a scientific standpoint, there are also certain impracticalities involved, which I’ll discuss in a moment. The published material does not identify the wines, or address the chain of custody. Also, MAA claims all the wines are from northern CA (Napa, Sonoma, Mendocino), yet the wine featured prominently in a video produced by RT America— Firestone—is from Santa Barbara.

Moms Across America is an organization devoted to inspiring moms to feed their families healthy, pesticide-free and GMO-free food.

I wrote to Moms Across America, requesting a copy of the full report. I received a response a little over a day later, from Natalie, promising that founder Zen Honeycutt would contact me when she returns from traveling next week. Apparently the ladies, other than Honeycutt, do not use last names on the website.


(Update: No response received from MAA as of April 21, two weeks after contact.)

I noted, while surfing their list of links to source materials, that their list references several heavily contested studies, some of which may even be fraudulent, like material from Dr. Huber and the Seralini study.

The list also includes many articles published on agenda websites and personal blogs. In the list, I also spotted misspellings like “prevalance” and “austism” in the headlines and links provided by these sources, which are red flags indicating the material was produced by amateurs.

I notice that MAA’s staff leans entirely to communication and marketing. I don’t see a single science or even journalism mentor on board; which says to me that although the ladies are passionate about what they do, there is absolutely no responsible fact-checking or source filtering taking place in the organization.

The Actual “Report” vs. Common Sense

The results show concentrations of glyphosate—even in organic and biodynamic wines—as ranging from below 1 part per billion to 18 parts per billion (ppb).  As a comparison, the legal range for sulfites in wine is 350 ppb, although most wines range between 40-100 ppb for sulfites.  The legal limit for sulfites in apricots is 2,000 ppb.

Even so, I can understand their concern, as the press release goes on to explain that glyphosate kills gut bacteria. And who wants to risk that, at any level, right? Sadly, so does sugar. And coffee. And chlorinated water and alcohol—all foods that we’re consuming in FAR greater quantities than glyphosate.

If indeed, there really is glyphosate in the wine samples. Which I doubt.

You see, glyphosate adsorbs heavily to soil. It clings to soil like a limpet on a rock. It does not want to be sucked up by roots and it is very difficult, especially for tall, woody plants like grapevines and trees, to take up enough that it would even reach the berries. Which is not to say it’s impossible. Just unlikely.

“Glyphosate binds very tightly to most soils and sediments in the environment and thus is generally not available for uptake by roots of nearby plants and poses very little risk of damaging the following crops or other plants in the vicinity of the application zone ,” according to Glyphosate.eu.  “Although plants generally do have the ability to take up glyphosate through their roots, only minimal amounts of glyphosate are available for uptake by plant roots because of the speed with which it adsorbs to soil.”

While it is still possible that commercial vineyards might experience some minimal uptake, I find it extremely unbelievable that organic/biodynamic vineyards would. And soil adsorption is only one reason.

Therefore, glyphosate applications, which are typically mixed with a heavy, sticky liquid surfactant, are aimed down low, at the little mischievous weeds around the tough, woody base of the vine, and not upwards or generally about the new growth, green leaves, and fruit. Applications are timed for windless days, because vineyard owners do not want the stuff flying about their own vineyards. And if you’ve ever used a glyphosate concoction you will have noticed that it sprays out and drops down quickly and wetly (due to the surfactants).  It does not mist around, rise up 40 feet into the air, and take off over several counties.

There’s a stock photo I’ve seen several times, published with articles about glyphosate or other chemicals, of a guy in a hazmat suit and blower misting something onto grapevines (see above).  That is not glyphosate. It may be sulfur, it may be an organophosphate, it’s hard to tell since I can’t find the original source, but it certainly isn’t glyphosate, and the suggestion in one article that it was had the entire wine industry either doubled over laughing or shaking their heads in disbelief at how dumb writers are.

So if glyphosate is not sprayed on vine leaves, adsorbs rapidly to soil, breaks down quickly, and doesn’t mist about—how did it get in organic wines? Without a list of the wines, it is impossible for anyone to submit more samples for back up or competitive testing.

I’d like to know—and from the comment sections of blogs and news sources blindly relaying the MAA press release, it’s clear that readers want to know—which wines were submitted.

What was the chain of custody for these samples? How were the wines obtained? Were they purchased at retail, taken home, then sent to the lab? Were they placed into lab sample bottles which may have been contaminated? And what was the testing method? Were the wines tested only once apiece, or were several different samples tested separately?

And why hasn’t the MAA supporter who apparently obtained the samples and paid for the testing ($120 per sample) stepped forward?  Were they ordered by a mom who just happens to love wine and was $1,200 worth of curious?  Without knowing, how can we rule out that these samples may have been ordered by a vindictive competitor or anti-alcohol propagandist?

Microbe Inotech Says Their Method “Not Validated for Wine”

I also wrote to the lab involved, Microbe Inotech, and this was their response:

“We do not post client reports on the web without written permission which we do not have in the case of the testing of wines for glyphosate. We also do not identify them without permission. Our Elisa assay method is very sensitive and has been validated for many different sample types but as we indicated to the client when engaged to do the work. The method has not been validated for extractions from wines, that does not mean that we believe the results to be inaccurate but would encourage further substantiation from this type of matrix …”

RT America’s news video on this topic merely regurgitates what was in the MAA press release, with no attempt at even minor investigative exercises like interviewing a winery association director or winery owner.

In addition, they’ve used stock footage of a completely innocent winery, Firestone, to illustrate their piece about toxins in wine. Firestone could not possibly have been one of the samples submitted, as MAA claims they all came from northern California.  Firestone is located in southern California—360 miles away.

At this time, neither RT America nor Firestone has responded to requests for comments. 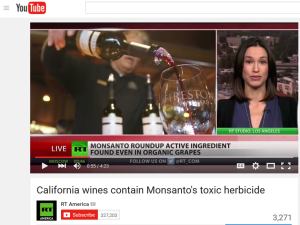 Moms Across America and Media Responsibility

The RT fiasco aside, this kind of non-transparent attack by Moms Across America seems to be an attempt to make the entire wine industry a victim of glyphosate hysteria. And since 95% of the wine brands in the U.S. are small family vineyards and wineries, this is a direct attack on small, sustainable and organic farmers.  It appears that MAA exhorts moms across the nation to feed their children wholesome food, while at the same time carelessly denigrating and attacking some of the same small farmers they claim to support.

MAA’s wholesale condemnation of food that “may” be poisoned or toxic is very much a negative and fear-mongering position. In some cases, they’re right. But as I pointed out, they also publish unvetted and inaccurate propaganda with equal zeal.

I’d really like to see them stretch themselves and balance their branding by providing positive press and support for the very same food producers they insist everyone should use—organic, sustainable and biodynamic. These small and stalwart food producers constantly struggle uphill against a tide of low profit margins, non-existent  economies of scale, limited marketing access, and insane paperwork—all performed by a handful of family members and laborers, sometimes even volunteers.

When groups like Moms Across America paint every food producer and every food niche with fear and loathing, they become part of the forces that have been slowly eroding small, sustainable farming for decades. They chip apart the small, loyal markets and the trust that each farmer works so hard to build, making it impossible to survive as an organic farmer. See Quitting Season: Why Farmers Walk Away From Their Farms:

A 2011 study showed that southern Arizona farmers and ranchers on average sell a collective $300 million of food products per year, yet spend $320 million to raise those crops. The same study finds net farm income trends have been negative since 1989, which means that our farmers have consistently lost money producing food.

Behind the scenes, farmers spend hours at the computer, wearily adding up market totals and expenditures. It is here in this solitary lamplit space that farmers visit some very dark emotional places. It is impossible to convey the deep anxiety for everything at stake, the fear that accompanies the risk, and the wounds that this stress inflicts upon a psyche or a family.

For every small farmer that fails, another acre becomes available for agribusiness or asphalt. MAA is, in effect, helping to create that which they most fear.

It’s admirable that MAA and similar groups are spreading awareness of how toxins in every category can affect our lives. MAA prefers to focus on GMO’s and glyphosate, and that’s all well and good too. But when the message itself becomes too one-sided, too strident, intolerant, uninformed and self-absorbed, it’s like a surfeit of any food, even water.

The message itself becomes toxic.