Anatomy of a Catfish
Conversation

If you don’t know what a ‘catfish’ scam is, visit my earlier blog article, How to Spot a Catfish.

In this article, I’m going to lay out for you how a catfishing conversation usually goes, and I am going to show you actual screenshots of someone trying to catfish me on Facebook.  I’m blurring out the name and photo so as not to run afoul of Facebook’s Terms of Service.

Here’s how these conversations start.

First, a new “friend” on your Facebook page sends you a private message. Hi, they say. Or hello, beautiful.  Nothing substantive.

When you respond, they flirt and compliment you a little. Then they move directly to taking you to a phone conversation.  This real conversation with a catfish lasted two hours, from 9.40 pm Pacific time to 11.40 pm.

I didn’t think he was very good at catfishing–he started off the conversation by complaining of a stomach ache, which of course is not exactly romantic and not at all alluring. But I figured if he wasn’t very good, maybe he wouldn’t sniff out that I’m a fake, too! 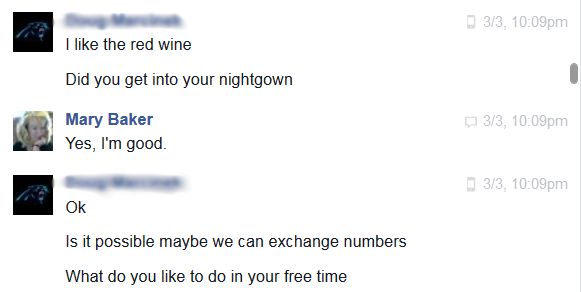 Within 20 minutes, he asked if I was single, and in 28 minutes, he asked for my phone number—and he was persistent throughout the rest of the call, even when I said I was uncomfortable about that. He also supplied his own number and wanted me to call.

I refused of course, but I was coy about it. I had every intention of uncovering his fishiness, but drew the line at giving him access to my phone. Indeed, about halfway through I had to take a break because the whole situation was making me nauseous. However, if I’d had a burner phone available, I probably would have gone for it.  Maybe next time, so stay tuned!

If you do speak on the phone, you’ll notice he has a foreign accent. He will tell you that he is an American citizen, but was born in another country and got his accent from his parents and childhood.

Next, any specific questions you ask will go unanswered. He saw on my page that I like wine, so he said he liked wine too. I asked his favorite. The response was, “I like the red wine.” He said he liked fishing. I asked what kind and what’s his favorite lure. He didn’t answer. I asked what he thought about that night’s presidential debate. No answer. Where does he hike? No answer. What’s the origin of his name? No answer. (It’s Polish, how could he not know that?)

So we chatted and flirted for awhile, and he began clearly trying to move me to a phone, where he can compliment my voice and cultivate a more personal connection.

And of course, the issue of age will come up. He seems forthcoming here, but what he really wants is for me to reveal my age so he knows how to position himself, demographically speaking. Older women are perfect targets because they’re generally financially secure, yet digitally naive. 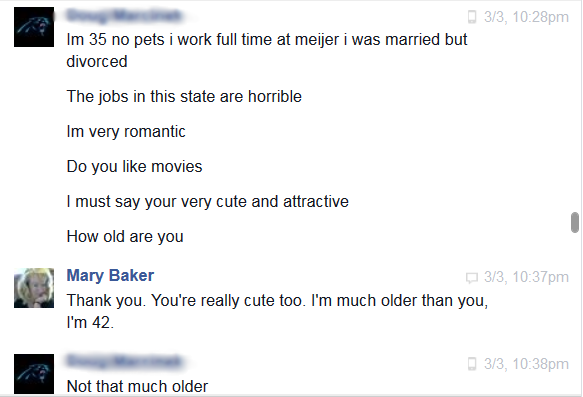 In an ordinary catfish scam, he’ll woo you for awhile, calling often, and let you think you’re extending the first invitation for a meet. He will enthusiastically agree to meet with you. By that time, he’s calling you honey and sweetheart and sending you love letters that he stole off the web.

But whenever you try to meet, he will be experiencing some disaster that requires him to ask you for a loan or advance to get him out of his pickle and into your loving arms. After you send the money, there will be yet another crisis that prevents him from actually coming. And this cycle will perpetuate for as long as you  keep sending money.

Anyway, I didn’t want to have a cozy voice conversation with this creep, so instead the catfisher went for a visual. He asked for a photo and when I refused he says …

Here’s an interesting side note: there actually is a 35-year-old man in Schaumburg, IL with this name. He’s a good-looking boxing coach. But the photo they’re using for this fake account is a pale, anemic guy with long limp hair who looks like a gamer that’s been living in his mother’s basement for 17 years.

The next morning I decided to ramp up the conversation. I picked a city 2 hours away from him and said I would be there in 2 weeks for a writers’ convention. I figured that would give him an opportunity to say, oh I can’t my car broke down I need money to fix it.  But he didn’t. All he said was, “oh”.

And I haven’t heard from him again.

Like I said, he’s not a very good catfish. He clearly needs more practice. Just make sure he doesn’t practice his new skill set on you!

Catfishing - How to Protect Yourself